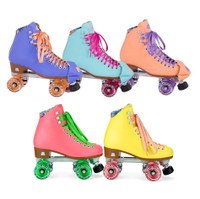 How to make skating even more fun? Riedell, a recognized authority in the world of skates, has come up with a new ingenious concept of fashionable skating equipment: Riedell Moxi skates. Riedell Moxi skates are a blend of style and high-performance incorporated into a retro-looking model of quad skates.

The distinctive feature of the Riedell Moxi skates is their vibrant colors and attractive old-school design. Owing to their incredible pallet Riedell Moxi skates never fail to catch the eye of a viewer. The color choice and the boot material vary according to the 3 existing models: Moxi Lolly, Moxi Ivy and the newly released Moxy Beach Bunny.

-          Riedell Moxi Ivy come in leopard and zebra prints and are 100% animal-friendly as they are made from vinyl.

-          The Moxi line has been recently amplified with a new Riedell Moxi Beach Bunny model. Moxi Beach Bunny skates, made from vinyl, are presented in 3 unconventional colors: Blue Sky, Periwinkle Sunset and Peach Blanket and complemented with contrasting laces.

The Riedell Moxi boots are designed in classical style with a traditional lacing system for a balanced look. All Riedell Moxi boots are reinforced to withstand the outdoor skating conditions. The updated Riedell Moxi Jack boots comprise new features for a superior comfort. Complemented with a moisture-absorbing Dri-lex lining these elite-level boots ensure dry feet at all times. The tongue is lined with the authentic shearling for ultimate comfort throughout the skating session. The lacing system is complemented with a metal lace stabilizer and reinforced lace stays for better fixation.

The stylish Riedell Moxi Lolly boots traditionally come in combination with a strong PowerDyne nylon Thrust plate and a choice of 62 mm Moxi Juicy or Moxi Gummy wheels with 78A durability rating. The Moxi Lolly skates are equipped with a black adjustable toe-stop. The Moxi Ivy set comes with a Moxi aluminum plate and a black bolt-on toe-stop. The Moxi Beach Bunny features a Marvel Aluminum plate and 58 mm Moxi Beach Bunny wheels rated 78A. Due to application of more affordable materials (e.g. vinyl boots) the Moxi Ivy and Moxi Beach Bunny sets are available within a lower price range. All 3 packages provide for a good grip, stability and control on the track, making the Riedell Moxi skates a perfect choice for the beginning and intermediate skaters.

If you prefer to customize your skates, the ready-made Riedell Moxi Lolly package may be altered. Customized Riedell Moxi will include a plate and wheels of your choosing in combination with any Moxi Lolly boot color.

Riedell Moxi skates are suitable for both outdoor and indoor recreational skating. The Moxi Juicy and Moxi Gummy wheels are big and grippy enough to endure all the imperfections of an outdoor track. The Riedell Moxi boots are reinforced on the outside and soft on the inside so that the skater can glide comfortably despite the vibration on an uneven skating path. Indoor application of the Riedell Moxi skates is also possible due to the perfect balance of the wheels size and hardness.

Perfectly shaped and equipped with the state-of-art components, Riedell Moxi skates are a paragon of elegant quality skates within the middle price range. Riedell Moxi will satisfy the pickiest fashionist ensuring a classy look on the skating track.